I’m sure we’ve had some of our followers wondering where we have been the last few weeks. It has been several weeks without a post. I wish I could say that we had taken a lengthy vacation to somewhere exciting. That has not been the case.

The last few weeks have been quite hectic. One reason we have taken a break from writing is that we have been awaiting the arrival of our first child. She arrived on June 22, and we have spent the time since adjusting to our new role as Mommy and Daddy. Another reason for our hiatus is that we had taken some time to re-evaluate the projects we have going on now, and to see what changes can and should be made.

As you all may know, this year is a growth/trial and error year for us. We are looking for new ways to expand our farm, and to find a niche that works for us and our schedules while adding diversity. When we added chickens, it was only for free ranging, and the option of having our own farm eggs and having our chickens to eat when they reached end of life. That transitioned into trying to hatch and sell babies, going as far as to becoming NPIP certified. After much discussion and evaluation, we have decided that hatching and selling baby chicks was not for us. As a result, we are now back to free ranging our ladies, and all our girls are much happier.

This summer has been busy for hay. With all of the rain, it has been near impossible to get hay cut in a timely manner. This is a source of supplemental income for us, and it has made it difficult not being able to complete the jobs in a timely manner. The weather dictates our ability to cut and bale the hay, as we want to have as little rain on the cut has as possible before baling. This has caused us to lose a couple of jobs as well, as someone else was able to get to a field of hay before we could. That being said, we have managed to have a good year for hay. The majority of the hay we have cut has been good quality hay, and we have excellent hay customers who have been so patient and understanding.

We do have another project up our sleeves, which I will be sharing with you all soon. We are so very appreciative of our followers, and I cannot wait to share the next leg of our journey with you all!

I was always told pigs stink for more then one reason, but I never really knew why. Late last year, I decided to buy a couple pigs to fatten up for stocking the freezer. So far, this has proven to be a stinky mess. Pigs are one of the worst smelling creatures that I have ever smelled before in my life. In addition, we are spending a small fortune feeding them.

Before we got our pigs, we had purchased half a hog from a local who sent the pig off to the butcher for us. All we had to do was pay for our half plus the butcher fees, and tell the butcher how we wanted the meat packed. In hind sight, this was the cheaper option.

There are pros and cons for both of these options. If you raise the pigs yourself, you obviously know exactly what the pigs have eaten. You also have more freedom as far as when you want to butcher. But, as aforementioned, the stench is almost unbearable. Pigs are also notorious for throwing mud anytime you get close to the pen. Pigs are well known for eating everything. This can be an advantage, but also a con if you think about it too much. Our pigs ate their sister.

An advantage of buying a butcher pig from someone you know is that you still have a general idea of what they are eating from day to day. You also are not the one who is out any cost if the pigs get sick or die at any point.

Both of these options are WAY better than buying meat at the store. It is way cheaper, and you know generally how the pig was raised, and in what type of environments.

In the future, I do believe that we will just buy our pig from someone that we know and trust, and forego a lot of the extra costs.

In the meantime, does any body want to buy a pig?

Within the next few weeks, we are planning a mass butchering of our chickens to stock the freezer. When we do this, I would like to use every usable part of the birds, including the feet. I have done some research and, in some cultures, chicken feet are considered to be a delicacy. I would really like to try them.

The most common thing that people do with chicken feet when cooking is to make a stock with it that is then used in soups and stews.

With some searching, it is easy to find recipes for basically anything. Below is a recipe that I found, which I would like to try. My fiance is a little iffy about it, and doesn’t think she will try it.

The past few weeks it has rained almost every other day. Normally rain in the winter is a great thing, as it helps ensure we have a good growing season. This year though we have gotten too much. The fields at one point had over a foot of water over nearly the whole place.

I’m not one to normally complain about rain, but mix rain and cold temps and you breed a disaster for young calves. I have been battling pneumonia in a small group of calves. So far this year I have lost two to pneumonia. They can go down so fast, in a mater of hours. There are some things you can do to prevent this from happening with your calves and cows. They make a vaccine that works wonder if they get it in time. Sometimes you have to resort to the strong antibiotics. With the two calves that I lost, I gave them the antibiotics. For one reason or another they were just not strong enough to improve. In some cases, unfortunately, there is nothing that can be done to save your calf.

Another thing to keep in mind while trying to save calves is hydration. Keeping the calves hydrated and full of electrolytes is one of the most important things you can do. This allows their body to fight the germ and have a chance to recouperate. Normally one of the first signs that a calf is sick is sunken eyes. This is also a main symptom of dehydration.

A lot of what’s important in human health also translates to calves. The same signs and treatments also apply. The key to helping calves get over any sickness is catching it early and treating it fast. 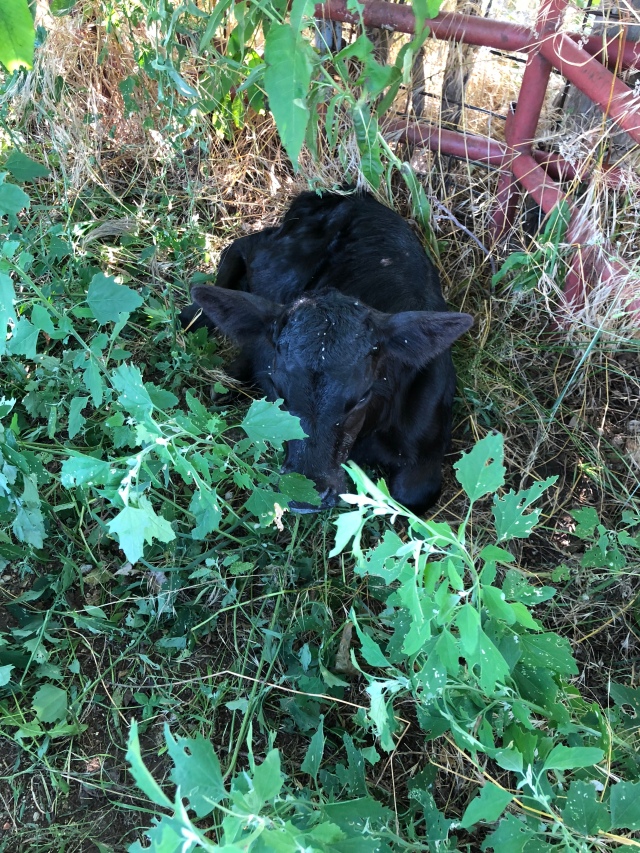